A Big Decision! (first blog entry)
I had a big decision to make, and I didn’t know it. I had a series of odd and largely not understood health issues as age 60 grew closer. In my last job, it had an effect. I found myself short-tempered and a general feeling of overtired. I’ve never been much for Doctors so I mostly blew it off. I found myself at a point of wanting to quit. I was unsettled and in general very unhappy. I had moved to an area I truly hated and regretted every moment I was there. Raleigh Durham area of North Carolina was not my thing. I grew up in upstate New York. What people don’t realize is that that part of the country is very down to earth and basically honest people. There is a reason that Rochester New York is at the very top of the list year after year for being one of the friendliest cities in the nation. We never worried about locking our car doors or locking our houses. A handshake was as good as a promise.
I moved to North Carolina thinking this would be my last move. I had traveled the world and lived in many places. I was just sick and tired of moving! So based on a 20-year-old memory, I looked for a place to settle down in Central North Carolina. Hickory, NC to be exact. I found a wonderful working situation that fit my personality to a T. I could exercise what I knew, and create a great work environment for many people. I could use all I knew to create a shining star. In my off time, I could jump on my bike and ride the Blue Ridge Parkway.

I lived in a great place and it had a private club. There I could hang with friends, and on Thursdays, I had a food party at my place. Week after week a dozen or so of us would get together and I could cook a theme dinner. Or simply BBQ steaks and sausages.

Life was great. But my work started putting pressure (or at least how I felt) to move to a different area and replicate the success for a broader area. An area that had been run into the ground and a disaster for years. That part made it interesting. But I found myself leaving the perfect life I had made for myself. It was a stupid decision on my part. I took the offer. Not right away. I turned it down the

first time and made a counter-proposal that I knew would be of greater use to the company I worked for.  But they didn’t see it. They were quite focused on what they wanted and saw no merit in my suggestion. I was asked again to accept the position, and at the same time, I was told the offer would not come again. At that moment, I agreed, and inside I felt I betrayed myself. I looked at it as just one more challenge. My life was always seeking those challenges. But I also realized I allowed myself to be “bullied” into something I did not want. Not a great start. 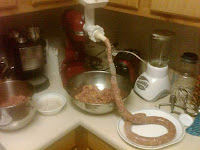 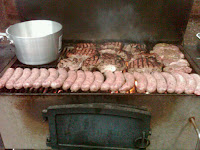 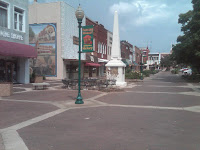 Downtown Hickory
So that’s how I ended up in Durham, NC. That’s when everything started to unravel for me. I found myself in the middle of a cesspool of politics and found myself undermined at each step. The details do not matter but I quickly realized why this area had so many issues and why previous people seemed to have no effect on it. Oh, we made strides. We made a number of improvements, and one of the problem locations soon became a star in the company. But there was a culture of destruction that I was not permitted to tamper with. It needed to uproot… expose and tossed out! But nope… untouchable.
This coincided with some health issues that started to pop up. Unable to breathe. Unable to stand without getting so dizzy I would fall down. Spontaneous nose bleeds… I mean gushers! I recall one morning getting ready for work. I was in the bathroom at the sink, dressed and ready to go. I sneezed. You would think I was shot in the face with a .45! Blood gushed everywhere. I covered my clothes and the entire area. It took me a good 10 minutes to stop the bleeding and then prepare for work again I was late for a meeting but kept what happened to myself.
I will spare you the ongoing details on this subject. The bottom line was I was tired of the trash at work and not having the power to make the fundamental changes required, and at the same time was being beaten down with endless symptoms that remained unexplained.
So I found myself in a situation where I was essentially not able to work. This went on for several years. It culminated in some cancer treatments and final operation. I was at long last declared totally cancer-free. During this time, I had plenty of opportunities to reflect on my life and the poor decision that worked against my own happiness. Work had always been my happiness. But I needed more than that now. I needed to find that bliss I had in Hickory NC.
So in between hospital visits, I would sit and think. I would imagine the many different places I had traveled in my life and what it would be like to live there. Yep… you guessed it… I’m going to list them!!
Denmark, Holland, France, Germany, and England. Japan (lived there 3 years!), Korea, China, Thailand, Viet Nam, Philippines, Australia, Mexico, Canada, Colombia (S.A.) as well as most states in the country to include Alaska. I lived in Memphis Tenn, Tustin California, Jacksonville NC, all over New York state. I had many places to reflect on.
I took into account the fact I would have a limited income. My savings were devastated during the health issue period of my life. I had a slight income from some internet consulting, but I certainly wasn’t rich. I wanted a place I could live that money wouldn’t be a problem for me.
Ruling out the areas of the country and the world that were too hot… too cold… too many bugs… I kept working on my list. I wanted to live in a place where going outside wasn’t a torture fest. I didn’t want to be eaten up by mosquitoes at dusk. I didn’t want to sweat myself to death or watch my breath freeze.
So where was I going to find this mystical place with perfect weather that was affordable?
My thoughts kept going back to my time spent in Colombia South America.  While I was there I met some of the most honest and nicest people I ever met. I found the society to be much like it was for me growing up. There was a feeling of freedom I had long since forgotten. There were not rules and regulations for everything. There was personal responsibility. Families remained intact. One family, I spent a lot of time with numbered in the hundreds.
In the town I mostly stayed in, it was partway up the Andes mountains. The only issue there was at the time, massive unemployment. (Not unlike we have now in the U.S…. the effective rate over 23%). When you have so many people out of work, they get desperate. And when they do there is crime. There was also the “F.A.R.C.”, a supposed socialist group but in reality a massive criminal organization that controlled much of the country. Kidnappings were epidemic as well and endless crimes on the street.
So this was the stage set, and some of the thinking that pointed me in the direction of my ultimate destination. In my next installment, you will see me zero in on my final decision. Right now, I am going to go look out my large picture window and admire the view! 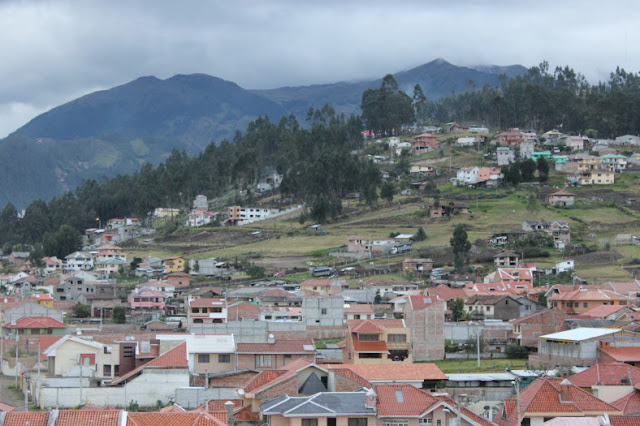