Skip to content
I had emailed a few people before I left the USA to ask about various properties I would see on the internet. You need to realize there are a couple of pricing tiers. There is the “live like a local” pricing that will get you a tiny (yes, tiny) apartment with an outdoor wash rack and minimal space. These can be found from 150-300 a month. Decent and cheap, not a bad way to go. No real amenities or much in the way of security. If you want to live on around $800 a month or less, this is a good way to go. Not the way I wanted. I am spoiled and prefer not to give up my comfort. The next tier is the upper-class local price. The third tier is the “new in town gringo who doesn’t know better” pricing. It doesn’t take long in your search to figure that out fast. You see, rentals are quite inexpensive compared to the USA. What I currently live in would be $1500-$3000 a month in most parts of the USA. You will find out soon, be patient!
I gave Brandon a “Hello I made it, and am ready to look” email. He was one of the people I emailed the few months before I came. We made an arrangement to meet up. Brandon is an American in his 20’s I would guess, who came to live here when his parents moved here. He has been here a few years and speaks decent Spanish. His girlfriend of the last year, Alexandria was driving as they picked me up at the arranged spot. We planned to see three apartments that afternoon.
The first one was nice. The entrance was a bit off-putting but nothing bad. We rode up the elevator a  few floors and came to this nice apartment in an unfinished building. A lady met us there. It was her place and she had to rent ASAP as she had to leave town. It was furnished but it was extremely tiny. Yes, I know. I beat that word to death. But it’s true! The people here tend to be smaller, hovering around 5 feet something, and therefore everything is built for them. Chairs are too low. Toilets are too low. I can close my eyes and imagine how an NBA player feels in our world.
It was a nice apartment, but I wasn’t feeling it. On to the next.
This next one was very very nice. It was in a nice quiet street but near everything. It had a fingerprint security gate and a beautifully landscaped building. Wide modern entrance and a few steps up to a very nice apartment. We looked at two-bedroom and a three-bedroom. It was nearly what I wanted. I would have been very happy there. The furniture was OK, and the price was around 650.
We go to the last one of the day. We approach a large building that in fact turns out to be four-building surrounding a courtyard. It is all nearly new build. A nice entrance, and a lobby with a very pleasant armed security guard in uniform. He waves us through, knowing why we are there, and we step out into a beautiful huge outdoor courtyard with benches. You just want to run over with a cup of coffee and chill! 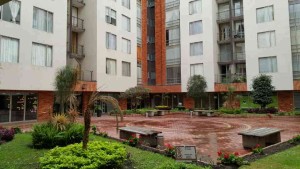 We proceed along the walkway past a few businesses including a bakery shop, to a card-required entrance. With a wave of a blank white card, the door clicks open. From here I can see into the gated indoor parking garage as well. I notice a keypad on the wall with a speaker. I learn later there is a code. After security clears your guest by calling you and announcing them, he lets them in. But then to get past the next door, they must enter a code so you can buzz them in. No one is getting into this place! 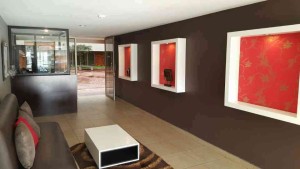 We enter the building and there are a few elevators. Brand new, fast and quiet. A real quality feels to them. I like that because I never wanted to die in an elevator. We ride up to the seventh floor. There are nine in total, ten if you count the extra areas. We step out into a wide hall and there is the place. We open the door and I swear I heard trumpets. The furniture wasn’t me, and everything has a high-end look at an average quality construction. But it was perfect. It was large, three-bedroom and two baths. One bedroom I could use for an office for this sort of thing (blog) as well as a book I may never finish, and some online consulting work. I felt it right away. It was far from downtown, but I didn’t care.  As a bonus, the brand new Tranvia due to open in June 2016 is two blocks away. That means ride downtown or across town will be $.25, quiet, clean and fast. Sweet! Lots of arguments here about if it will ever be finished. 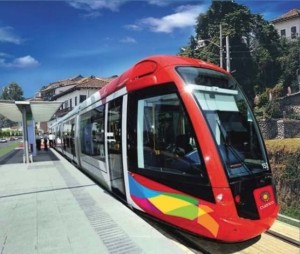 Cuanto es? (how much?) $500 a month plus utilities. A total of around $700/mo incl. fiber internet lights gas etc. I see it as a score. I leave but I knew I wanted it. Maybe an hour later or less, I announce I want it for sure. I also realized that a one-bedroom would have never cut it, so I went back to the B&B and told him I wouldn’t be looking at his place. I also paid him his rate for the few days I stayed there.  Brandon rushed everything for me and I was able to sign the lease and move in the next day.
For the first time since I arrived, I felt like I was home.