Skip to content
One of the places I have really wanted to go see is the Pumapungo Museum. I finally got to that yesterday! The building is 4 stories, but it felt a bit sparse. I found the pottery quite interesting as it went way back in time, but most of it was in the 1400-1700 year range. I had hoped to see more Inca artifacts or more from the Canari people that preceded the Inca. I did really enjoy taking the slow walk through the various exhibits. The best part came when I finished. I went outside and walked through the huge dig site.
I love history. I read all I can. I have had a love for history for decades. I thought I knew a lot about the Incas. I didn’t. Yes, sure I know a lot about the various “Kings” and battles, dates etc. I know the main King with all the plans was named Tupac. Yes, seriously! But until you see the layout of the Inca capital, located in Cuenca, and built on the previous city of the Canari, you don’t have a true picture.
I would prefer to draw it out, but words will have to do. First, the chosen location. Cuenca is located in a valley surrounded on all sides by extremely tall mountains. That makes the valley safe and isolated. In the middle of this valley, there is a large hill. This high ground gives a 360 view of the surrounding mountains, but also of the valley itself. There are 4 rivers that flow through the valley, and right next to the hill. The valley is fertile land and can grow various crops year-round. The temperature is basically 72 degrees every day of the year. It is perhaps one of the most perfect locations in the world to grow and thrive. Too high for mosquitoes to live, so it was pretty disease-free.
Beyond the physical location, the way of life and the detail of the planned community was amazing. The Incas were extremely wealthy. But what does wealthy mean? How about for starters, no hunger? They had a network of brilliant storage faculties that would hold food for many years and not spoil. They kept about a 6-year food supply on hand at all times. If one area of the empire had famine, the resources were sent to take care of them. While they were a war-like society, it was based on an amazing pre-planned vision. The armies would go to various territories and offer to have them part of the empire. Most communities agreed, but those that didn’t were killed. They were offered education, food, a place to market their goods and security. The downside is they were required to provide workers for various projects. The constructed one of the largest road systems in history. It was about 14,000 miles worth of roads, much of which was in extreme mountain areas of the Andes. These roads provided a communication network, the ability for commerce, rapid troop deployment, etc.
Back to the Capital design! Around the valley floor encircling the hill would spread village huts. Circling the hill was a series of micro-farms. 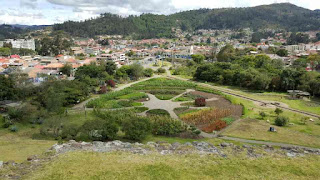 You can see int his picture the circle of the micro-farm, Yes, the pathway is now paved for tourists to get close. You can see that each micro-farm had an assortment of crops and were tended by a group of families. Various animals were also kept in these areas. These circled the base of the hill.
Going up the hill, the next ring that encircled the hill about halfway up was a series of storage houses and army barracks. The buildings were rectangular and the basic same size.
The next area nearest top was a grouping of buildings that housed women, They provided weaving skills, crafts, and the daily duties to support the top level. 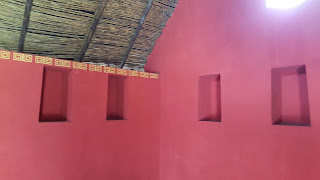 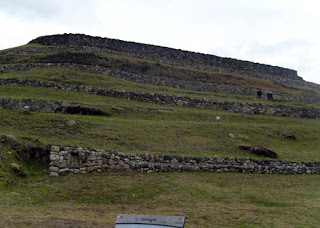 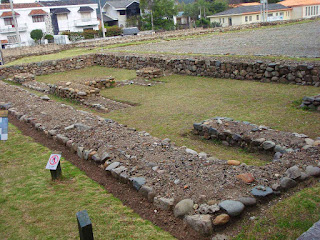 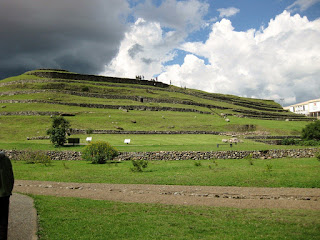 The very top kept the Scientists, the Priests as well as the noble class. There was an area that measured the stars and the locations of various outposts and villages outside this valley. They had a great understanding of Astronomy and used it in the layout of construction. They took into account daylight, moonlight, star location, etc. when planning. Yes, they held sacrifices. Primarily children. A concept that goes back thousands of years all over the world. Abraham was told to sacrifice his son. He was going to do so because it was part of the culture up until then. They did not appear to have massive sacrifices like the Mayans or Aztecs but did have their share. They worshiped primarily the Sun. Many sacred locations are found on mountain tops, as they felt it helped them communicate with their God better.
Also along the sides of the steeper areas are terraced. These are also for food and paths for walking.
The is a central set of ovens near the top. These ovens are about 20 feet or so across. they contain man-made bricks as well as extremely precise stonework. Food was cooked for the entire upper community in these ovens or massive BBQ pits. Here are top and side views. 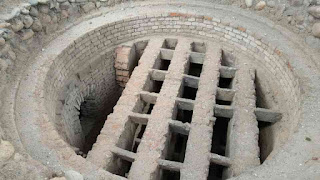 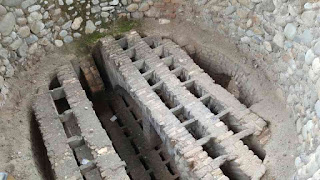 For the ancient world, they achieved peace, wealth and health unknown throughout the rest of the world. They had massive amounts of gold and silver, however, they didn’t use this for money. They really didn’t have money. The closest things that could be used outside of bartering was beautiful necklaces and metal “scrapers”. That is my word for it. They look like the scraping knives that tanners use for animal hides. 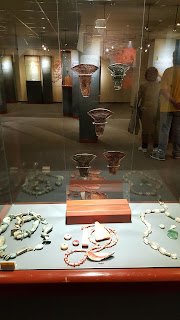 The gold and silver were basically used for art. They decorated houses, objects, clothes, etc with it. If you had walked through the hilltop back in the day you would have seen gold decorating doorways, walls, as well as endless statues and art pieces.
Gold, in particular, was associated with the Sun God due to its everlasting brilliance and never tarnish. Art and worship were nearly one and the same.
After my afternoon of exploration, I decided to check off one of the restaurants on my list. I made a stop at Terra Luna. It could be called either a very late lunch or early dinner as it was just after 3PM. They were open and I got to be the only person there for a while. It was delicious! 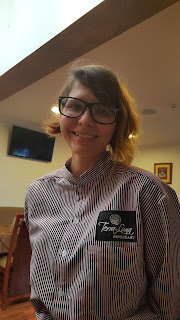 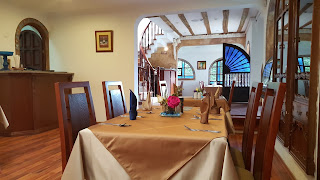 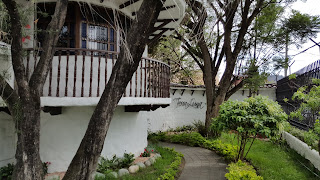 Andrea was my waitress and her English was quite good. She is a recent immigrant from Venezuela so we had a lot of notes to compare moving to Cuenca. The owner, Gerardo is an extremely friendly and pretty funny guy. The place is spotless (I saw in the kitchen) and the food was as good as anywhere. I have King Prawns. YUM!!
I will post some of the Museum pics now. 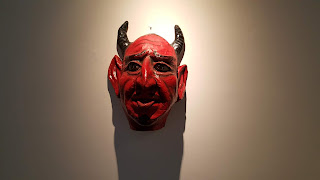 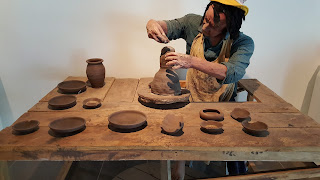 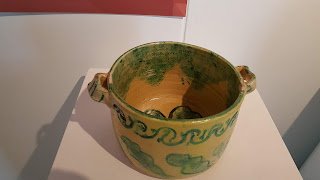 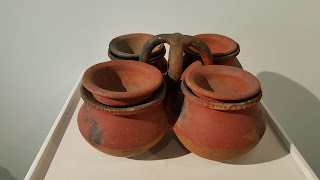 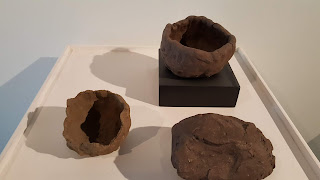 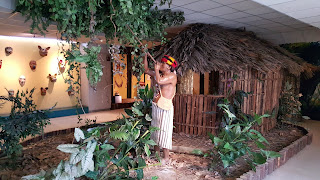 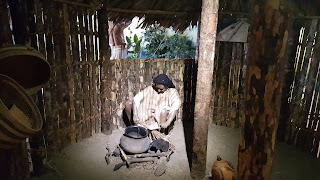 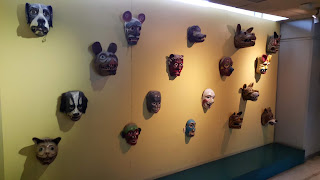 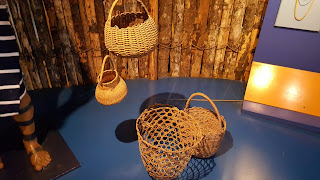 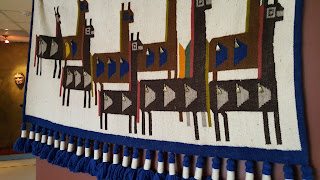 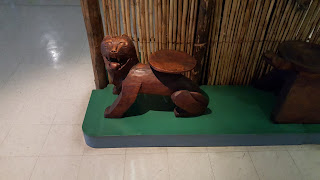 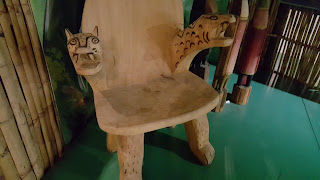 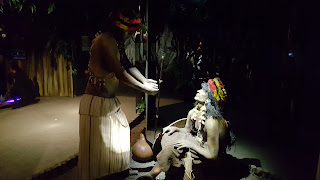 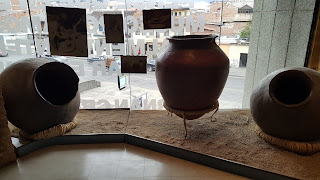 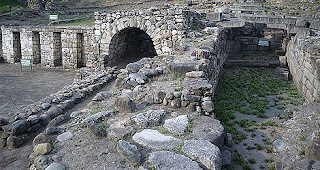